This foundation is my passion 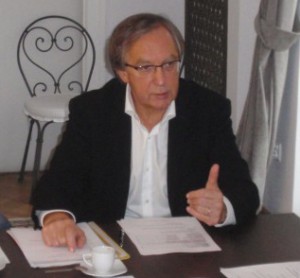 How did the idea of the Foundation originate?

After 40 years of experience in the fields of culture and media, I felt the need to pursue projects I had dreamed of for a long time. That was my passion. That is why all current programmes of the ART–MEDIA-FILM Foundation combine several aspects: originality and necessity of their implementation, as well as my own emotions and passions. A good example of this is the idea of the secondary technical school of arts and crafts for film and theatre. This is our answer to the need to preserve professions that are dying out. Nowadays, there is no school offering such a comprehensive way of educating future craftsmen in the field of art design, costume design, prop making, etc. In my opinion it is vital for the foundation to become the centre which could come up with system solutions contributing to cultural development, and enable artists to make their dreams and plans comes true. The technical school is a good example of what we are trying to achieve. So is the programme Revitalisation+ which is supposed to encourage local communities to shape the quality of the public space, implementing architectural harmony in small towns. All of that should be based on the citizens participating in the decisions made by local authorities. We would like to make local communities aware of how considerable an influence they have on what their neighbourhood looks like and remind them that local authorities should first of all address the needs of the inhabitants. We are working on other projects as well, such as the European Media Summit or the Futurological Congress, which is meant as a tribute to Stanislav Lem on the 10th anniversary of his death.

What are the most important tasks the Foundation is facing?

In the field of culture there are two kinds of duties we face, two urgent obligations. Firstly, building social capital, encouraging activity and creativity, fighting all sorts of exclusion and facilitate social integration. Secondly, we need to intensify the search for a strong cultural bond in Europe. That is probably the only way to maintain the sense of belonging to one family among the citizens of the European Union, despite the diversities which resurface every now and then. All the projects run by the Foundation meet those requirements.

How does the Foundation function?

Unlike some of its projects, the Foundation itself is not financed with the free-market money, but private funds of a man who is committed to it. Therefore, I have chosen the most difficult of paths, partly because non-governmental organisations in Poland are not yet a fixed element  of our democracy. Still, after 25 years of democratic system, they have limited impact. But this form of activity gives us independence and some freedom of action. We are in talks with our potential partners regarding further project ideas. They look promising. I am very glad that the concept of the foundation has met with wide appreciation and interest. Many people, having learned about our goals and projects, want to support them. They join in our activities, motivated mainly by their concern about the state of Polish culture. And that is what we have in common.

So all I can add is to wish for the ART-MEDIA-FILM Foundation to realise its ambitious plans.